This chapter explains how you can control your computer using VoiceOver gestures on a Multi-Touch trackpad.

If you have a Multi-Touch trackpad and VoiceOver is turned on, you can use gestures to navigate and interact with items on the screen, and enter VoiceOver commands.

To use VoiceOver gestures, you enable the Trackpad Commander by holding down the Control and Option keys (called the “VO keys”) while rotating two fingers clockwise on the trackpad, or by selecting the option in VoiceOver Utility. Once enabled, you can use a set of standard VoiceOver gestures, and you can customize other gestures by assigning VoiceOver commands to them.

VoiceOver gestures involve using one or more fingers to drag, tap, flick, or rotate on the trackpad. You can use different techniques for a gesture. For example, you can tap using two fingers from one hand, or one finger from each hand. Try different techniques to discover which one works best for you. You can use keyboard help to practice standard and customized gestures and learn what they do.

VoiceOver speaks the items in the VoiceOver cursor as you move the cursor, and plays a sound effect whenever it encounters a blank space on the screen. This information helps you gain a sense of the actual location of items on the screen as you navigate.

To enhance collaboration with sighted users, VoiceOver makes the area of the screen you’re working in more visible by dimming the rest of the screen. You can adjust the transparency of this effect using the Touch pane in VoiceOver utility. Other collaboration features, such as the caption or braille panels, can also be used at the same time as VoiceOver gestures.

To disable the Trackpad Commander and stop using VoiceOver gestures, hold down the Control and Option keys while rotating two fingers counterclockwise on the trackpad, or select the option in VoiceOver Utility.

If you’re using a Multi-Touch trackpad, you can enable the Trackpad Commander to start using standard VoiceOver gestures to navigate and interact with items on the screen.

To enable the Trackpad Commander:

Hold down the Control and Option keys (the “VO keys”) and rotate two fingers clockwise anywhere on the trackpad.

To use VoiceOver gestures:

To disable the Trackpad Commander:

Hold down the Control and Option keys (the “VO keys”) and rotate two fingers counterclockwise anywhere on the trackpad.

You can use both VoiceOver gestures and keyboard shortcuts to enter VoiceOver commands.

If you have enabled the Trackpad Commander to use VoiceOver gestures, you can assign VoiceOver commands to some gestures.

Note:VoiceOver includes a set of standard VoiceOver gestures, which you can’t change.

To assign commands to gestures: 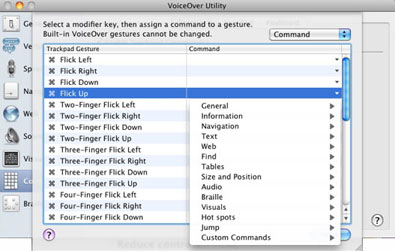 You can use the Custom Commands menu to assign scripts and Automator workflows to gestures. For example, you could run a script (such as a Perl, Ruby, Python, or AppleScript script) when you use the gesture Command-Two-finger Double-tap.

If you’re using VoiceOver gestures, the rotor is like a virtual dial you turn to access various ways to navigate, based on the current context. For example, when you’re browsing a webpage, use settings such as tables, web spots, or images. In other contexts, use settings such as navigation, words, characters, or adjust.

To use rotor settings:

The Character and Word settings are most useful when interacting with a text area, to read the text by character or by word. Use the Adjust setting to increase or decrease the values in a slider, stepper, splitter, or other similar control.

The Navigation setting navigates text line by line. When you’re interacting with a text area, VoiceOver begins speaking the first line at the point where the cursor was located when you first flicked up or down; it speaks each subsequent line in its entirety.

When you use the Navigation setting in a window or dialog, VoiceOver might not speak all of the items on a line, depending on how the items are arranged. You may need to flick left or right and then flick up or down again to hear other items.